November 21, 2011- Opponents of Gov. Scott Walker said they have faced threats and thefts in the days since the recall effort began.

Two volunteers in the petition drive reported violent threats made against them to the police. Neighbors in Monona also complained to authorities of politically motivated thefts from their yards.

The threats involved phone calls from an area code in Minnesota. The calls came overnight after Walker's opponents began the recall, said Madison resident Tom Peer, who said he received a call at 2 a.m. on Thursday.

"They said, 'If you don't stop circulating recall petitions, we will kill you,'" said Peer.

A similar call came to Heather DuBois Bourenane, of Sun Prairie. The United Wisconsin recall worker jumped out of bed when her phone rang around 4 a.m. on Thursday.

"He said I had attracted the attention of some very bad people, and my life and the lives of my family were in danger," Bourenane said.

Mike Papantonio: The GOP’s Search For A Hero

Think Progress: Billionaires Use Tax Loophole To Lower Their Tax Rates To 1 Percent

November 18, 2011- In 2009, 1,470 households reported income of more than $1 million but paid no federal income tax on it, through their use of various tax loopholes and shelters. Tax rates for millionaires have fallen by 25 percent since the mid-’90s, while one quarter of millionaires currently pay lower tax rates than the average middle-class household.

Numbers like these are the driving force behind the Buffett rule, the administration’s proposal aimed at ensuring that millionaires can’t pay lower tax rates than middle-class families. To add to the pile of evidence that such a rule is necessary, Bloomberg News ran a segment today on billionaires who manipulate the tax code to lower their tax rate all the way down to one percent:

Still another financial firm has tallied how much net worth is sloshing in the pockets of the world's most spectacularly wealthy. So when will the time finally come to stop the counting and start the taxing?

November 17, 2011- In today’s astoundingly unequal global economy, banks can go either of two routes — or both — to bag ever bigger returns. They can squeeze the 99 percent with nuisance fees and penalties. Or they can cater to the richest of the rich.

But both routes have bumps. The 99 percent can squeeze back, as they did earlier this month when Americans by the tens of thousands shut down their Bank of America accounts to protest the bank’s $5 debit card greed grab. And the richest of the rich? To cater to these fortunates, you first have to find them.

Rachel Maddow: Herman Cain To Women: Think Twice Before You Accuse Me And Be Afraid - Be VERY Afraid! 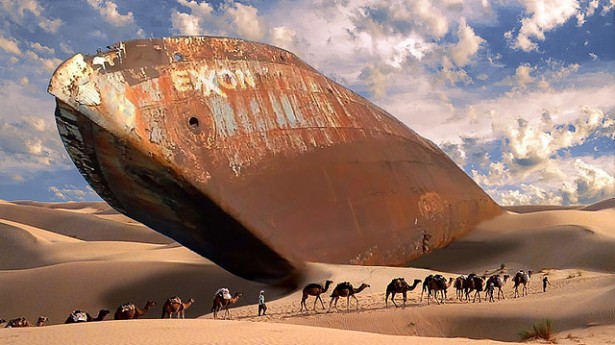 November 14, 2011- A new radio ad campaign and website sponsored by the oil industry’s largest firms seeks to conflate union solidarity with the “Occupy” and “99 Percent” movements with the Keystone XL pipeline, which the White House delayed last week for approximately a year for greater study.

Called “Jobs for the 99,” the campaign has released two radio ads decrying “the Hollywood crowd” who’ve ostensibly taken over Washington, D.C., holding it hostage from creating jobs for oil industry workers. Both ads end with a credit that claims they were paid for by unions.

Ruling to come after election; Delay of $7-billion project could further strain relations between U.S., Canada

-By Sheldon Alberts and Mark Kennedy

November 11, 2011-The Obama administration has thrown the controversial Keystone XL oilsands pipeline into limbo with a decision to delay a final ruling on the $7-billion project until after the 2012 presidential election.

In a statement released Thursday afternoon, the U.S. State Department said it was ordering a new review aimed at rerouting Keystone XL around sensitive ecosystems along its proposed path through Nebraska.

A final determination on whether to grant Calgarybased TransCanada Corp. a presidential permit to build the 2,700-kilometre line is now unlikely before "the first quarter of 2013," the department said.

President Barack Obama, in a statement Thursday afternoon, said he backed the move because of the need for more information about the potential impacts on people and natural resources along the pipeline route.

Thom Hartmann: Why the media is playing into the Cain narrative & not a fake candidate